If the year 6 students at Carey Baptist Grammar School were not babbling in French, you would swear they were learning sign language. 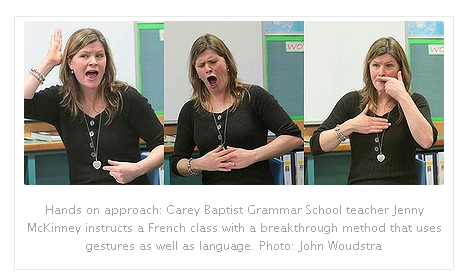 ”Est-ce que je peux manger de la pizza?” one child asks, miming the act of eating a pizza. ”Oui, tu peux manger de la pizza!” the class chants in return, also gesturing wildly. Halfway through the lesson, the stereo is cranked up and the class raps to a song about lions, which they have written themselves and set to Taio Cruz’s chart-topping single Dynamite. The year six students speak (or sing, or rap) in non-stop French for the entire 40-minute lesson. Every verb, noun, adjective and conjunction has a matching gesture. When they say riche (rich), the students rub their fingers together. For pauvre (poor), they empty out their pockets.

Ellie Colquhoun, 12, says the gestures help her remember the meaning of words. Despite studying Italian at her former school for four years, Ellie says she is already more fluent in French after learning it for just over a year. ”The gestures and songs make it more fun. We didn’t do anything like that at my old school, it [Italian] was just like work.”

Teacher Jenny McKinney is the first to admit her French classes were not always so much fun. For the first 12 years of her teaching career she taught second languages by the textbook. ”I found students weren’t developing their fluency, they were dropping out, and I felt like my efforts were futile,” Ms McKinney says.
Advertisement

”Parents were complaining, they would say: ‘We went to France and my kids couldn’t say anything.’ They were probably right to be honest.”

In 2004, Ms McKinney was questioning whether teaching was for her, when she attended a workshop run by Wendy Maxwell. A Canadian immersion teacher, Ms Maxwell was responsible for a major breakthrough in second language instruction in thousands of schools in the Netherlands, US, Canada and Singapore.

Her technique, which is known as the Accelerative Integrated Methodology (AIM), uses gestures, music, dance and theatre to teach second languages so students rapidly develop fluency. ”For me it was, right, that’s it, I now realise I’ve been teaching languages in the wrong way,” Ms McKinney says.

She threw away her textbooks, lists of nouns and verb conjugations and became not just one of the first teachers to introduce AIM to Australia but an advocate for the method across New Zealand and Asia.

”I want to spread the word that developing language fluency in our learners is a possibility,” Ms McKinney says.

Carey Baptist Grammar School was so impressed by the methodology, which is now used in hundreds of schools across the nation, it employed Ms McKinney two years ago to develop a gesture-based program for the teaching of Mandarin. Deputy head of the junior school, Ben Dooley, said Ms McKinney had ”changed the paradigm completely about how we approach languages”.

Radio National ‘Lingua Franca’ – Maria Zijlstra
Saturday 17 September 2011 3:45PM
Bodily gesturing can visually and kinesthetically represent language and is made use of in sign language but also, and successfully, as an adjunct in language teaching. Jenny McKinney explains the underlying pedagogical and linguistic principles for the gesture-based teaching program, the Accelerative Integrative Methodology. 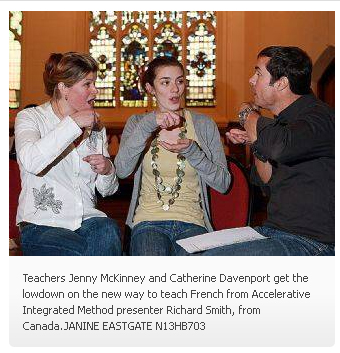 All prices are in AUD.